The first AR chip is here! The AI ​​performance is increased by 2.5 times, and the 4nm process is adopted.
Zhishi reported on November 17 that today, Qualcomm launched Qualcomm's first Snapdragon AR2 platform. This is the field of chips for mobile terminals, the first dedicated processor for AR devices, and Qualcomm's first processor for AR glasses.

The Snapdragon AR2 platform adopts a multi-chip distributed processing architecture combined with customized IP modules, including AR processors, AR coprocessors and connection platforms. Compared with the first-generation Snapdragon XR2 platform, the overall AI performance of the Snapdragon AR2 platform is improved by 2.5 times, and the power consumption is reduced by 50%. The overall power consumption of AR glasses can be lower than 1W.

Why did Qualcomm choose to launch the Snapdragon AR2 platform specially designed for AR devices at this node? What makes the platform unique? How does Qualcomm view the recent changes in the XR field? After the press conference, we talked to Hugo Swart, vice president of Qualcomm Technologies and general manager of XR business, with a few media to uncover the answers to the questions.

01. The first processor built specifically for AR
The Snapdragon AR2 platform uses a 4nm process. Compared with the first-generation XR2 platform, the PCB area in AR glasses can be reduced by 40%.

The Snapdragon AR2 platform adopts a distributed architecture, which can directly allocate the processing of some sensing data to the glasses terminal, and offload more complex data processing requirements to smartphones, PCs or other compatible host terminals equipped with the Snapdragon platform.

In addition, the processor supports nine parallel cameras for user and environment understanding. Its enhanced perception capabilities include a dedicated hardware acceleration engine that improves user motion tracking and positioning, and is used to reduce high-precision motion such as gesture tracking or six degrees of freedom (6DoF). AI accelerator for input interaction delay, and re-projection engine for smoother visual experience. 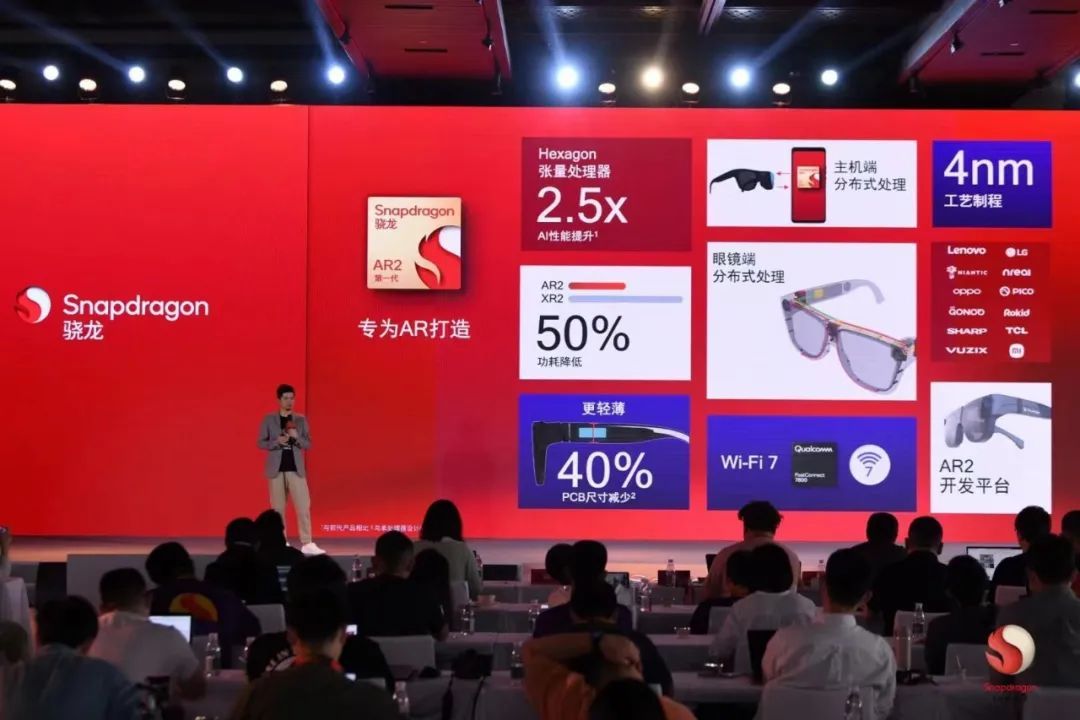 At the same time, developers can use some features of the second-generation Snapdragon 8, such as ray tracing, to build better content for the Snapdragon AR2 platform.

In terms of device connection, Si Hongguo also said that the current Snapdragon AR2 platform is mainly aimed at related connections in Wi-Fi 7 scenarios, but also supports Wi-Fi 6 scenarios. "Specifically, we need to consider how many people are connected to a Wi-Fi at the same time, as well as the Wi-Fi speed when everyone is using it. Therefore, the Wi-Fi 7 standard will bring users a better experience."

02. PICO and Lenovo have entered the market, and the AR2 platform is about to land
When it comes to this Snapdragon AR2 platform, Si Hongguo is very confident. He said that the reason why this processor platform adopts a new naming system is because this processor specially built for AR is a milestone, and it is also Qualcomm's efforts in the XR field. "Based on its technical level, we call it AR2." Si Hongguo said.

As for why this processor was developed, Si Hongguo said that we see that there is a relatively big challenge in the current AR devices, which is the inability to make the devices thinner and lighter while providing better content services. "The Snapdragon AR2 platform is therefore launched."

At the same time, he also said that the landing rhythm of the Snapdragon AR2 platform should be similar to that of the XR 2 platform. "OEM manufacturers may have their own arrangements for this. We can see at the press conference that many manufacturers have already conducted research in this field." At present, many OEM manufacturers have entered different stages of product development using Snapdragon AR2. stage, including Lenovo, LG, Nreal, OPPO, Pico, QONOQ, Rokid, Sharp, TCL, Vuzix and Xiaomi. 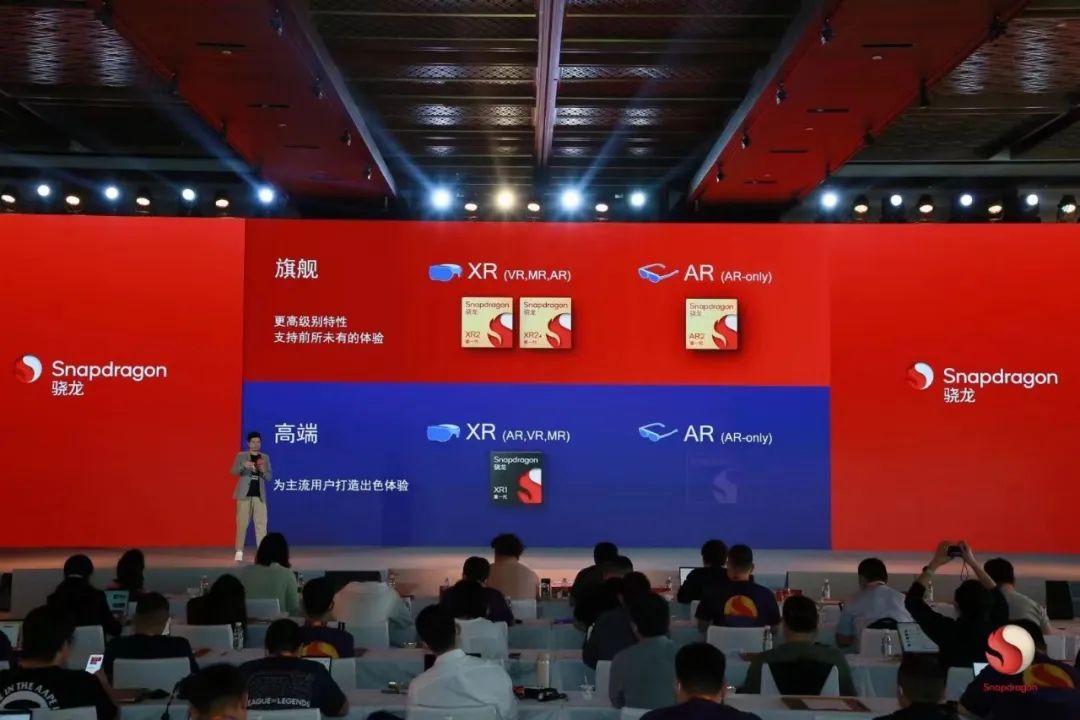 Finally, he also mentioned that for the current AR glasses using different optical designs and solutions, he believes that OEM manufacturers can better launch better differentiated products, deeper products, and better display products. At the same time, Guo Peng, head of Qualcomm's XR business in China, also added: "For different displays and different optical solutions, AR2 is compatible, there is no difference."

03. "We are not worried about short-term industry volatility"
In fact, the Snapdragon AR2 platform released by Qualcomm this time uses a completely different architecture from the XR 2.

"The equipment form of AR equipment is different from that of XR equipment. Due to its product form, VR equipment has a relatively large internal shape and a certain amount of heat dissipation space, so its processor can do local calculations and handle some graphics calculations. But The internal space of AR devices is limited, so we adopted distributed computing.” Si Hongguo said.

Due to the different product forms of AR devices and VR devices, their processors need to adopt different processing methods, which is one of the reasons why Qualcomm created a processor for AR devices. But he also mentioned that future VR devices may use both local computing and distributed computing.

When many people mentioned the recent downturn in the XR field and the market performance not meeting expectations, Si Hongguo expressed his confidence in the XR field. 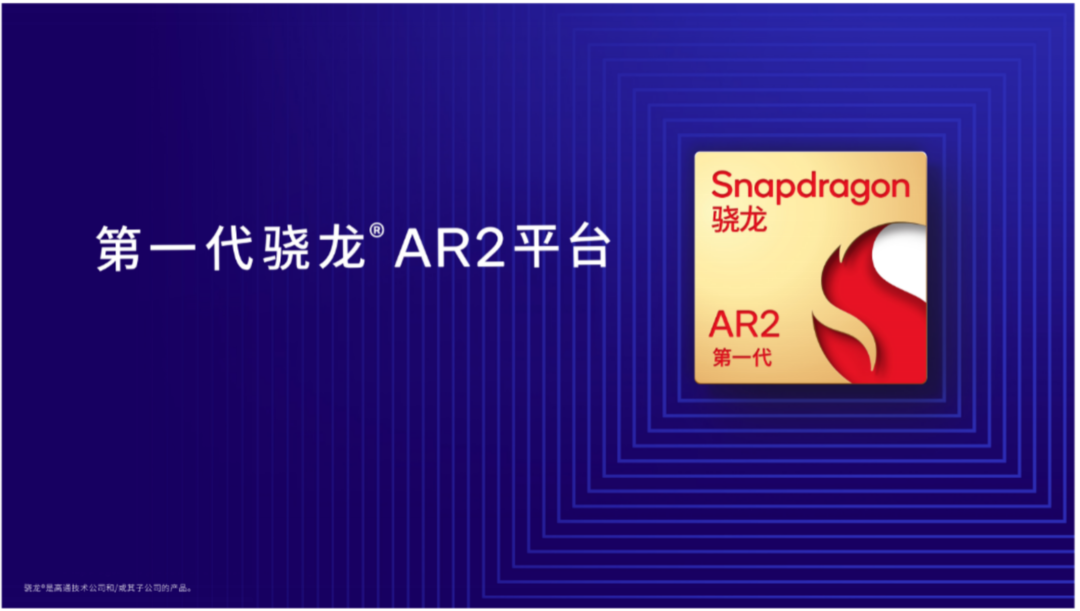 "For the XR field, we will increase investment, and we believe that this direction will have a good future. With the development of the industry market, product maturity and product popularity will gradually increase." Si Hongguo said, "We do not Will be worried about the fluctuations in some industries in the short term.”

He also said that two months ago, Qualcomm and Meta signed a long-term agreement that will span multiple generations of products, which will play a new role in promoting the XR industry.

04. Conclusion: The first AR processor is released, AR glasses may usher in content explosion
The release of the Qualcomm Snapdragon AR2 platform today is undoubtedly exciting news for AR players. This not only solves the computing power problem that AR manufacturers have been troubled for a long time, but also represents the chip giant's recognition of the direction of AR.

Not only that, judging from the list of research and development of the Qualcomm Snapdragon AR2 platform given by Qualcomm today, many players are already at the forefront, including PICO, Xiaomi, Lenovo and other leading players in various fields.

Samsung to triple production capacity by 2026 amid rising demand